There’s an urgent need to reconcile action and ambitions 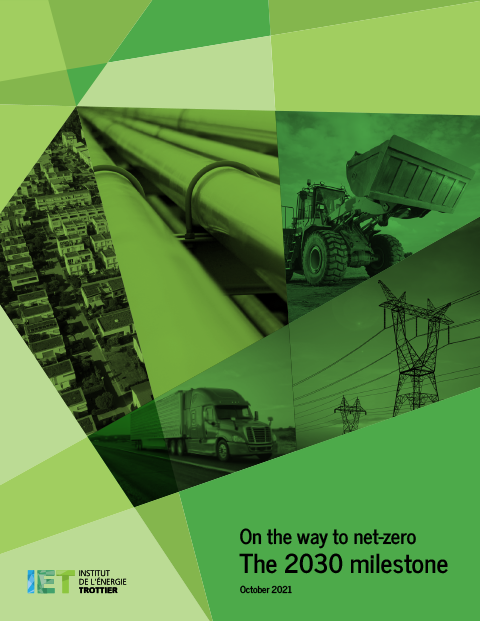 Are Canada’s announced and deployed efforts to achieve 2030 climate goals sufficient and consistent? In the report On the way to net-zero: The 2030 milestone, Polytechnique Montréal’s Institut de l’énergie Trottier (IET) points out that there is nothing less certain than the possibility of achieving Canada’s GHG reduction emissions, based on the information available. In addition to outlining the huge disparity between publicly announced measures and those required to achieve stated goals, the IET also offers avenues to readjust course, optimizing solutions from an economic point of view.

The trajectory analyzed is that which was proposed by the provinces and federal government following the June 30, 2021 adoption of Bill C-12. This bill sets a year 2030 target to reduce greenhouse gas (GHG) emissions by 40% to 45% compared to 2005. The 2030 target constitutes a first milestone on the path to achieving carbon neutrality in 2050.

The IET report bases its analyzes on a comparison of three recent modeling exercises: 1) Canada’s Energy Future 2020 (Canada Energy Regulator), 2) Greenhouse gas and pollutant emissions projections Atmospheres in Canada 2020 (Environment and Climate Change Canada) and 3) Canadian Energy Outlook 2021 – the latter being a publication co-authored by the authors of the IET report.

Thus, “by comparing sectoral projections from these reports, which seek to reduce GHG emissions, with publicly-announced quantifiable measures, our analysis identifies major gaps that will have to be filled very quickly if Canada is to achieve its 2030 milestone objectives,” says Normand Mousseau, report co-author, IET Scientific Director, and professor of physics at the Université de Montréal.

The 2030 challenge, closely linked to 2050
However, more marginal or half-measures are out of the question: “The challenge of meeting 2030 targets has changed dramatically because of the long-term goal of carbon neutrality. As long as the 2050 targets were ambitious GHG reductions of 70% or even 80%, partial decarbonization solutions, such as fuel substitution or stronger energy efficiency measures, could be considered viable,” says Simon Langlois-Bertrand, report co-author and energy specialist.

However, such an approach is no longer realistic from an economic point of view, if the focus is a 30-year horizon. According to report authors, it would be foolish to deploy technological solutions that would have to be replaced in 15 or 20 years, like the use of natural gas in transport, for example. Further, when seeking to achieve zero emissions, the inability of a sector or a sub-sector to completely decarbonise itself cannot be compensated by reductions from other sectors, but only by carbon capture and sequestration, a technology that should only be used as a last resort, given uncertainties in terms of its costs and scaling possibilities.

To sum it up, it’s crucial to avoid short-term actions that will hamper the longer-term plan.

Critical sectors
Four sectors are deemed critical: power generation, oil and gas production, transportation, and buildings. However, planning for the thorough transformations expected in these sectors does not seem to have started.

For example, to achieve expected decarbonization levels in the electricity sector (including generation and distribution), province-wide planning – which may extend over several years – is required. At present, fossil-fuel intensive provinces such as Alberta, Saskatchewan, and Ontario, do not appear to be in the process of developing meaningful plans.

Similarly, reductions projected by Environment and Climate Change Canada in the transport sector, namely 19% in ten years, imply a profound change of course for a sector whose emissions have been steadily increasing for decades. Here again, announced and quantifiable measures analyzed in this report suggest that important elements to achieve these reductions are missing, measures which need to go far beyond raising sales targets for zero-emission personal vehicles.

With major and immediate action, Canada can reduce its emissions by 40% in the next decade
The report points out that there is still room for the Canadian economy to reduce GHG emissions by 40% over the next ten years, using solutions that are both technologically and economically viable. However, major and swift action beyond what has already been publicly announced and implemented is needed to reverse the trend. These measures must be initiated now, and coordinated between various orders of government.

“It’s not impossible to conceive that behind closed doors, governments are beginning to develop quantifiable measures for the sectors identified here. If this is the case, it’s urgent that this information be made public, not only to help the public understand and for businesses to prepare for the magnitude of transformations to come, but also to enable analysts to independently validate the relevance and effectiveness of these measures. All those who can must contribute to this collective effort.”, added Louis Beaumier, Executive Director of the IET.